The historical re-enactment of the Passion of Christ in Mogliano is a religious event and scenic among the first in Le Marche region in this kind of events: the first edition is dated 1962.

The squares and streets of Mogliano, as every Friday of the year, light up in a new light that leads us to relive the last hours of the life of Jesus Christ.

The commemoration began with the representation of ‘”LAST SUPPER” and continues with “PROCESS” in front of Pontius Pilate, “THE CRUCIFIXION” and “RELIGIOUS PROCESSION”.

The crowd Jewish, Roman soldiers and soldiers who make up the traditional representation, in Mogliano there is also the coffin of the dead Christ, with effigies of saints, symbols of the Passion and the band.

The Good Friday procession is rooted in that so, in fact, his annual conduct is documented in the archives of the historical Moglianese Carnili since 1769.

The representation of the Passion of Jesus Christ wants to be a moment of reflection on the Jesus pain and a tourist attraction.

The commemoration “Mogliano 1744?, is a journey through time, a direct image of a slice of life of the eighteenth century and the way the Moglianesi lived to transition of the troops of Maria Theresa of Austria, composed of lavish parades of noble Moglianesi families with their little shorts and Austrian troops in gaudy uniforms of the officers, we make and enhance the pride and the spirit of competition in the Contrada’s spectacular racing flag. 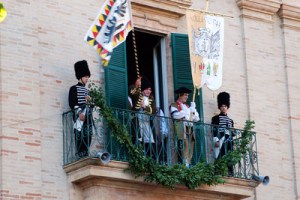 What happened in Mogliano is the story of a perfect host, motivated by a strong sense of hospitality, who managed to tie friendship between distant peoples and their cultures. We are in 1744, Italy is crossed by an expeditionary Austro-Hungarian directed towards the Kingdom of Naples and opposed by Spanish forces; the Friday before Easter come to disturb the peace of the village in the Marches and spread a natural fear of looting and bullying, the Austro-Hungarian soldiers of four regiments. More than 5,000 people are established in the top of Mogliano waiting for a move or der. Their commander, General Bruone, is housed in Palazzo Forti, another general is housed in Casa Cosimi.

After the first impact the Moglianesi are intrigued by what, in fact, is a “peaceful invasion” and give way to a peaceful coexistence with a month of dating, relationships and celebrations. A single fact disturbs this joyous tranquility: the discomfort went from a soldier to a commoner (it is said that, hungry, stole two pieces of bread). The commander, to wash the shame suffered by the country asked and obtained from the court martial the sentence to death of the soldier.

The punishment is considered too harsh by the people and judges, clergy, nobles and commoners implore clemency, to obtain grace. April 30 reaches the starting order for the troops, citizenship and military themselves are all saddened and farewell is made by a solemn procession general. On the same day, in gratitude for the welcome given, from the headquarters of Macerata comes a “Diploma of the Queen of Hungary”, signed by the commander imperial prince George Christian Lobkowitz, who attributes to Mogliano the title of “City”.

The Night of October 31 on Mogliano (MC) cripples the Halloween night! Witches, spirits and men of darkness to enter the square on a thrilling trail in the historic center full of attractions, music, shows, and lots of fun for the kids!