Almost at the end of Via Roma, the street that runs through the old town and that you enter in the main square, Piazza Garibaldi, is the most important building of Mogliano, now used as town hall: Palazzo Forti. Designed in the end of the sixteenth century as economically autonomous structure, as well as the home of the rich and noble family Forti, has three floors above street level and two below, reachable by road Carelli.
Date built: Century XVI – XVII

The theater, which opened in 1844 has a horseshoe shape with thirty eight stages on three floors.

Church of Santa Maria in Piazza

The church keeps inside the altarpiece by Lorenzo Lotto – The Madonna in Glory with Saints John the Baptist, Anthony of Padua, Mary Magdalene and Joseph. (Oil on canvas, 330 x 215 cm).

The work was commissioned in 1547 by the mayor of Mogliano, Jacomo Boninfante, at the price of 130 gold crowns to be paid in several installments, which also included the cost of the frame gilded wooden, built by Bartolomeo de San intaiador Cassano. The altarpiece was completed in 1548 and handed over to the community by the student Durante Nobili. The original frame is guarded in the adjoining sacristy.

It is located at the crossroads for Montegiorgio and Francavilla d’Ete, lapped by the river Ete Morto.

Building has started on 11 November 1579 the first stone was placed from the Bishop of Fermo Msgr. Pinelli, who chose the location. The government and the administration were attributed, with bull of Pope Gregory XIII, to the brotherhood of the SS. Sacramento, which still holds them.

Here is venerated an image depicting ‘Crucified Christ that rises from the grave’ fresco of the end of 400. Following a miraculous event that happened in the year 1809, the church, rebuilt in elegant neoclassical design by G. Lucatelli, Sanctuary was declared by the then Viceroy of Italy.

The medieval fortress of which remains only the bastions, is the best place to admire the view; inside the fortress there is the Church of St. Mary of Suffrage, now deconsecrated, built in 1698 and expanded at the end of the XVII century. From the fortress you can also see the former St. Michael hospital built in 1782 and Autopalace, an art nouveau complex, former buses garage , now restored and converted to an exhibition area.

Once ‘outside the city walls’ because it was built beyond the castle moat. This church has been transformed during the centuries , the last change was in the XVIII century

when the church “was turned” (the presbytery was moved to the entrance side) and was added a monumental staircase to connect the entrance to the new roadway. Inside you can admire an altarpiece of Durante Nobili from Caldarola, a pupil of Lotto and an interesting picture of G.B. Fagiani depicting Mogliano as it appeared in the XVIII century.

In the museum there are preserved and rediscovered the ancient crafts also in future projection, with the purpose to reaffirm the social relevance of craftsman work as possible and sustainable social development.

The project is inspired by the Art. 9 of the Italian Constitution (The Republic promotes the development of culture and scientific and technical research. It safeguards natural landscape and the historical and artistic heritage of the Nation); the project doesn't intend to look back with nostalgic eyes, but to look up to the territory in search of a more intense relationship between citizen and his work. Infact inside you will find ancient as well as modern instruments, workshop for the design and transmission of these ancient arts.

Municipal Art Gallery and Museum
The Art Gallery is located on the top floor of the ancient palace Palazzo Forti.
It contains findings from the Roman Age and Picentes Age.
Opened on request
Address Via Roma 54 - Google Maps

Museum of Sacred Art of Mogliano
The museum opened in 1979, is located in a few rooms adjacent to the church of Santa Maria di Piazza, above the sacristy, the ancient oratory of Our Lady of Mercy. The Museum collects sacred ornaments, statues and other items belonging to the same church and other urban and rural churches of Mogliano together with other objects used by confraternities, that show the faith and devotion of our fellow citizens ancestors in the past five centuries. 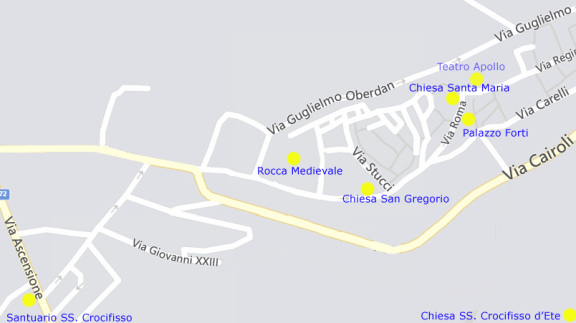