Near a public fountain, called Calcaticcio, there was a small niche, a "pintura", in which a picture of Christ who rises from the grave was portrayed on the wall, Christ is flanked by two angels holding some instruments of the passion. 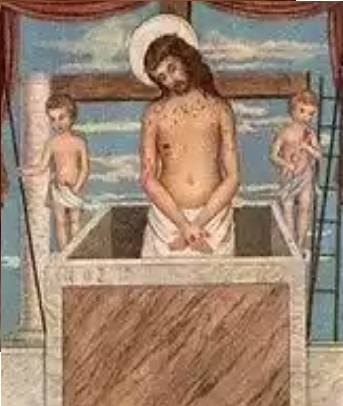 It is believed that the painting dates back to the first half of XV century; It is one of the many niche scattered throughout the area: some were built as a vote against the plague, others as signs of divine protection for travelers and pilgrims traveling along our regions.

On 29 August 1639 the city council decided to give the image of the Crucifix to the Confraternity of Mercy, who requested it, so they would restored the pianting.
Meanwhile spread the rumor that the Crucifix did many graces, so we witnessed an awakening of devotion and a more intense flow of people, both from Mogliano and from other cities. The Confraternity, thanks to the many offers, he didn't immediately restore the "pintura", but decided first to build a new church near the niche and another one on the slope of the hill.

The church was consecrated the 27th of May 1641 by Msgr. Rinuccini, Bishop of Fermo. It has its own day of celebration known as “Ascensione” , and it was able to obtain plenary indulgence granted by Pope Innocent X; on the nearest lawns a small market took place.. An extraordinary fact reawakened the interest and devotion for our Crucifix.

A sworn statement said: "On the 9 of June 1809 at 5 pm (Celebration of Jesus Sacred Heart) two shepherds, grazing the flock near the church, one named Francesco, son of Luigi Illuminati, and the other one named Vincenzo, son of Domenico Renzi, the first 14 years old and the second of 7 years old, moved by the voice that there was no longer the Crucifix, ran to look by the two low windows, at the two sides of the main door, the two doors of the church were closed, and the cloth covering the Image was leaning on the altar, the Holy Image was completely exposed."
The miraculous exposure of the Holy Image was a turning point: the rush of devotees grew enormously and graces, that were dispensed, grew even more .

Eugene de Beauharnais, Viceroy of Italy, issued from Milan a decree announcing that gave to Calcaticcio church the status of Sanctuary.

The architect, painter and also citizen of Mogliano, Giuseppe Lucatelli was committed to realize six fine paintings  depicting the Virgin, St. John the Evangelist and four angels holding the instruments of passion.

The 14th September 1813 took place the solemn ceremony officiated by Msgr. o Guerrieri, bishop of Athens and vicar of Fermo, in the presence of Mogliano's clergy and a large crowd of devoted men and women. Since then many people continued to visit our Sanctuary: in the last two centuries there have been moments of greater or lower flow, by the way, the devotion to the Crucifix of Mogliano has never stopped.