Mogliano rises on a hill at 313 m. on the sea level and halfway between the Sibillini mountains and the Adriatic coast, an ancient village in the charming and relaxing hilly landscapes known for the craftsmanship of wicker used for the production of baskets and furniture. 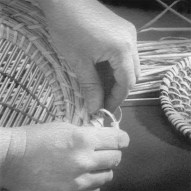 Is one of the few centers in the area to already have its own name before the eleventh century and it had continuous settlements.

Its origins are lost in the mists of time, but it can be said, thanks to recent archaeological discoveries, in particular of a sandstone stele with Mid – Adriatic inscription, now located in the National Museum of Ancona, that the present territory of Mogliano was inhabited in VII-VI centuries BC from Picentines, who lived in villages scattered along the line of our hills and they had their own culrure, that was later absorbed by the Roman culture, when it submitted Picentines in the first decades of the third century BC.

Other findings show Roman presence in the following centuries; it is likely that during Roman Period our territory was one of the areas that Urbs Salvia and Pausulae had colonized, and there were small groups of houses that were mainly agricultural centers, connected in some way with the two Roman cities;the name of Mogliano could come from a noble Roman citizen, who had here his property and built a villa.

After the barbarian invasions, Mogliano became a Lombardic “court”, a complex of property with an administrative center, which belonged to the Duke of Spoleto, until 705 AC when Duke Faroaldo II gave it to the abbot of Farfa Thomas; for some centuries, its history is connected to the famous abbey of Farfa in Sabina.

From the end of the XII century to the middle of XIV century, the castle was ruled by the lords called “from Mogliano,” from the noble Fildesmido to the most famous Gentile who in 1345 became lord of Fermo and ruled the city until 1355

when he was defeated by the weapons of Cardinal Albornoz. With the institutional reform Albornoz 1357, that gave a new legal-administrative order to Marche Region, Mogliano was included in Fermo district , whose was one of the most important castles; in 1569 Mogliano became indipendent thanks to Pope Pius V, but in 1578 was ruled again by Fermo.

The years passed by, while in the developing village were built peaceful houses in the place of the old fortifications,churches and bell towers instead of guard towers.

In 1744, to have helped the Austrian troops marching toward the kingdom of Naples, Mogliano was declared a city with a diploma of the queen of Hungary.

After the French Revolution, even in Mogliano there were attempts to change, as the establishment of a democratic administration in February 1798, which lasted just over a year.

So, during the Napoleonic Age, Mogliano was included in the Department of Tronto; in 1815, with the restoration of the Papal Government, returned under Fermo district, and finally, in 1828, was granted permission to join Macerata district.

During Risorgimento, Mogliano was not insensitive to the liberation movements: in the spring of 1849 it was democratically elected the new City Council, that protested against the occupation of the French troops of the port of Civitavecchia; in 1860 Mogliano gave its generous contribution to the liberation war, many citizens rush to enlist in the Company of the 1st Battalion of the “Hunters of the Marche”, which was commanded by an officer and citizen of Mogliano Capt. Cesare Latini.

After Marche annexation to the Kingdom of Italy and the division of the Region into four provinces, the City of Mogliano remained included in the province of Macerata.

After the 8 September 1943, Mogliano took part to the liberation struggle, many families hosted and hid in their houses soldiers, draft dodger and prisoners escaped from Sforzacosta and Servigliano concentration camp. In Mogliano, the night between 24 and June 25 1944, in the headquarters of the Polish Corps took place the meeting between his commander January Vladislaw Anders and the commander of the Partisan group “Nicolo” Ten. Augusto Pantanetti , during which were built the foundations for Macerta liberation, which took place on 30 June. On 10 March 1946 it was democratically elected the first municipal council of the Postwar period.

Today, the village has become a town, after fifty years of development that has transformed Mogliano into a true “craft center”, as it is written on a road signal to welcome those who arrive in Mogliano.