It was originally an oratory in honor of Virgin Mary of Mercy and was built by the inhabitants of Mogliano on one side of the public square around 1420. It was later expanded, enriched with a bell tower and a façade with a terracotta portal; in the lunette a painting of Our Lady of Mercy. Above, the clock tower with a beautiful Guelph window in travertine on which stands the ancient emblem of Mogliano. The interior is now used as a sacristy. Between 1532 and 1542 the communities of Mogliano erected on the left side a bigger church with a nave with golden ceiling coffers. The new church, dedicated to the Virgin, in 1548 was equipped with a beautiful altarpiece, with a rich wood frame, commissioned to the Venetian painter Lorenzo Lotto: the Virgin Mary and the Saints John the Baptist, Anthony of Padua, Mary Magdalene and Joseph . (For more information about this Painting you can consult bilingual panel placed inside the end of the nave).

Towards the middle of 1700 the City Council promoted the rebuilding of the church that had one central nave and two aisles and decorated with stucco: it was completed and consecrated in 1774. The Pala del Lotto was put in the presbytery and in harmony with the architectural style of the church. Today the painting was reunited to the frame and placed above the altar.
Other works are in this church. Entering the church we can see in the left aisle the second altar with a painting of G.Fabiani: Blessed Peter of Mogliano blesses the plague victims. Later the Virgin and Child with Saints Dominic, Sebastian and Stephen around with a crown of medallions representing the fifteen mysteries of the rosary. Between the two paintings you can admire a copy of the Holy Family and Saint John.

In the first altar of the right aisle, a painting by A. Ricci represents the Pieta flanked by the Marie and St. John the Evangelist. In the second altar, dedicated to Our Lady of Loreto, the Virgin of Loreto with Saints it depicted. At the end of the nave the chapel of the Sacred Heart with a wooden crucifix on the right and on the left a copy of Mater Dei. On the back of the church ther is an organ with choir in carved wood, decorated in 1788 by our G. Fabiani.

In the spaces above the sacristy is placed the Museum of Sacred Art of Mogliano, in which are collected ancient sacred art objects used by confraternities and works of religious art from ancient local churches , showing the faith and devotion of our fellow citizens ancestors over the past five centuries. The museum was inaugurated on 18 marzo1979 by Bishop Msgr. Cleto Bellucci, then closed due to the inaccessibility of the building and reopened to the public 24 June 2016 during the celebration for the patron saint (St. John Baptist), after the works for the repair and restoration . 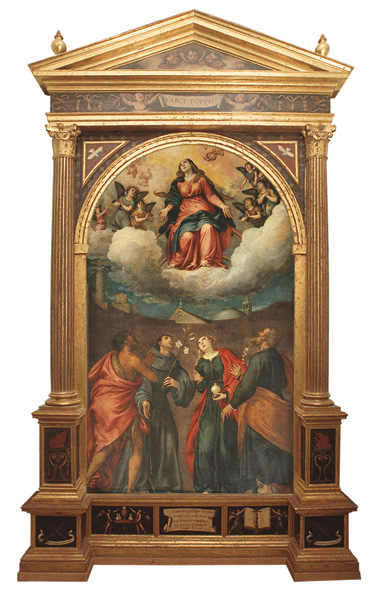